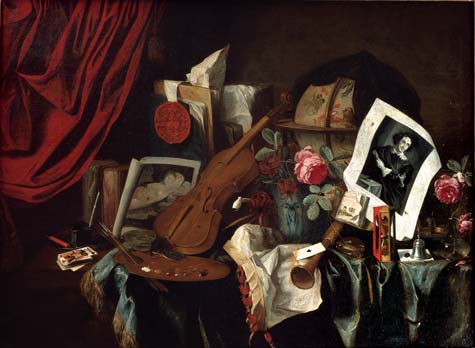 Oil on canvas
44 ⅜ x 57 ⅜ in.
Purchased with funds from the Morton R. Hirschberg Bequest, and gift from the family of Jacques Goudstikker, in his memory
AP.2014.4.1

Jacques Grief was born in Dordrecht, a small river town in northern Holland. Because of a physical deformity, he was given the nickname of "de Claeuw," meaning "the claw." The artist, a brother-in-law of the painter Jan Steen, was known for his still life images. Popularized as an independent genre by Dutch artists of the period, still life appealed to the taste of Calvinist patrons who objected to overtly religious art.

The term vanitas (Latin for "emptiness") is applied to still life images featuring objects that represent the brevity of life or the emptiness of worldly concerns. De Claeuw's contemporary public was familiar with such symbolism and would have recognized the partially covered celestial globe as an attribute of astronomy. The globe, along with a copy of the Amsterdam Waersegger Almanach (1677), a soothsayer's almanac, refers to man's inability to accurately predict the future. The musical instruments, inkwell, sealing wax, and cards refer to the vanity of worldly amusements. The hourglass and the smoke associated with the pipe and candle denote the passage of time. The flies and flowers are symbolic of decay and the shortness of life. The image of Venus refers to the impermanence of physical beauty. The small portrait of the prominent engraver Pieter de Jode (1604 – 1674) is a reference to the immortality an artist attempts to gain through art.

From 1933 through the end of World War II in 1945, the Nazi regime pillaged cultural property and artworks throughout Europe. Although exhaustive efforts were made after the war to return these objects to their owners, many never found their way home.

In 2012, the Museum received notice from the heir of noted Jewish art dealer, Jacques Goudstikker, regarding a claim to the painting Vanitas by artist Jacques de Claeuw, which had entered the Museum’s collection in 1962.

In May 1940, Goudstikker, one of the foremost Old Master paintings dealers in the Netherlands, fled with his family by sea in advance of the Nazi invasion. Tragically, Goudstikker died in an accident on board ship but his family reached safety, salvaging an inventory log that noted the nearly 1,400 artworks he had left behind.

After thorough research, the Cummer’s Board of Trustees voted to return ownership to Goudstikker’s heir, daughter-in-law, Marei von Saher. As part of the settlement agreement, the Museum negotiated the repurchase of Vanitas — a favorite among visitors — which included a gift from the family of Jacques Goudstikker, in his memory.