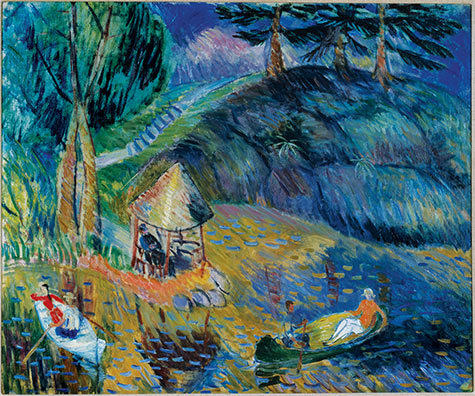 William Glackens began his artistic career as an illustrator for several Philadelphia-area newspapers. In the evenings, he attended the Pennsylvania Academy of the Fine Arts, where he met fellow artist, Robert Henri (1865 – 1929). Glackens and Henri, along with Glackens’ high school friend John Sloan (1871 – 1951) and five other artists formed The Eight, a group committed to depicting the realities of urban life. Glackens ultimately broadened his scope to include representations of the leisurely pursuits of the middle class. The Lake depicts a view from New Hampshire’s White Mountains, where Glackens and his family spent several summers. It features bright colors and loose brushstrokes, and reflects Glackens’ 1912 exposure to contemporary French painting as a buyer for noted collector Albert Barnes (1872 – 1951), founder of Philadelphia’s Barnes Collection