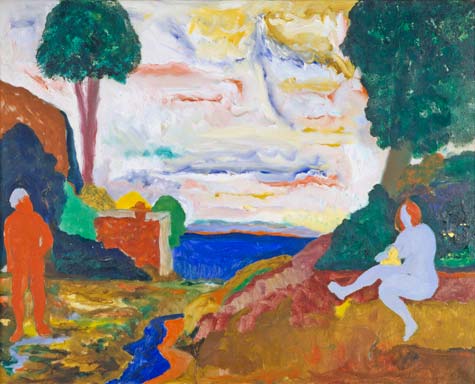 African American artist Bob Thompson’s vibrantly-colored, abstracted paintings inspired by Old Master scenes garnered the young artist early acclaim. In The Tempest, he reimagined a painting of the same name by Renaissance artist Giorgione (c. 1477 – 1510). The earlier work has been the subject of much debate throughout the centuries, namely due to its odd composition, which features a fully-dressed man watching a nude woman breastfeeding an infant outside on a hill prior to an impending storm. Thompson’s version also leaves unanswered questions about the meaning of the scene, but with its shock of color and gestural shapes, it functions as an independent work rather than merely a recreation of an earlier painting.