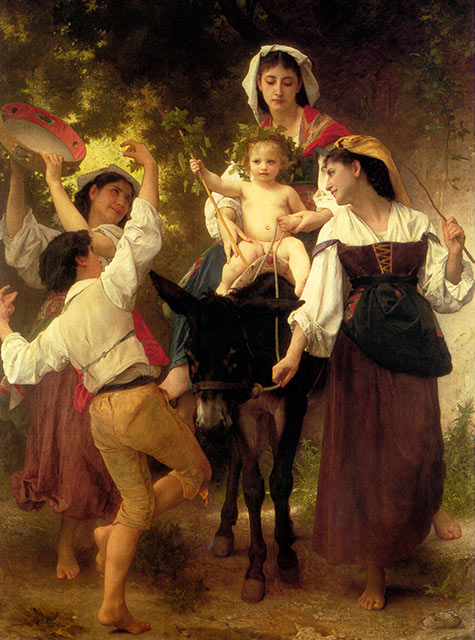 Return from the Harvest

After a strict academic training as a painter at the Ecole des Beaux Arts in Paris, William-Adolphe Bouguereau was awarded the prestigious Prix de Rome in 1850. This prize enabled him to move to Rome, where he industriously studied and copied the Italian masters. Four years later, Bouguereau returned to Paris. His extraordinary success as a painter, combined with his influence as a teacher, made him one of the masters of 19th-century academic painting. As a prominent juror, Bouguereau also exerted decisive influence over the annual Paris Salon, keeping it within the bounds of official academia and systematically rejecting the experimental painting of Edouard Manet (1832 – 1883) and the Impressionists.

The donkey ride, featured prominently in this painting, offers Bouguereau the opportunity to show his astounding technical skills and classical learning in the representation of an age-old harvest festival. The child riding the donkey is playing the role of the Roman god Bacchus, accompanied by joyful peasants. Additionally, the theme of this painting carries Biblical allusions whereby the child is identified as the young Christ. This painting was commissioned by Alexander T. Stewart, a wealthy American department store owner of Irish descent who stipulated that "the painting was to be the artist's greatest work and not a nude subject." Unfortunately, Stewart died before Bouguereau could finish this much-admired painting.