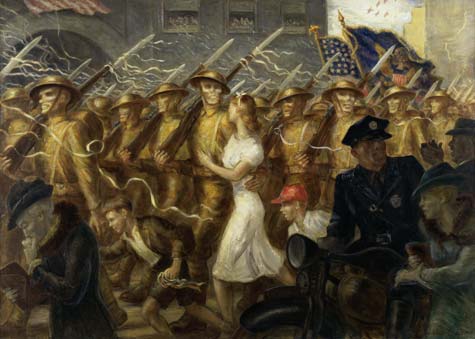 Painted in the years between the Great Depression and World War II, Parade to War, Allegory reflects many Americans’ apprehension about joining the looming conflict. John Steuart Curry transformed a celebratory parade into a gruesome scene, where young soldiers morph into skeletons. Beneath the streamers and waving flags, Curry portrays conflicting emotions. In the center of the canvas, a young woman in a white dress and two small boys seem unaware of the impending peril, while two women in the foreground are distraught and overcome with grief.