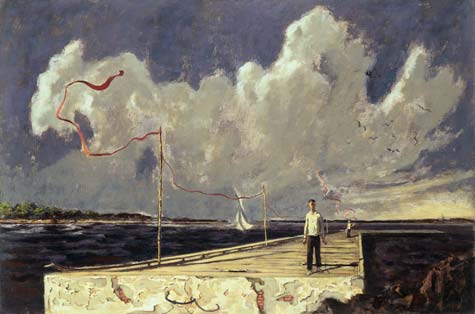 End of the Festival

Oil on Masonite
24 x 36 in.
Purchased with funds from the 2011 Grand Benefactors of the Cummer Ball and the Robert Helms Memorial Fund

Born in Eustis, Florida, Hughie Lee-Smith spent most of his childhood in Georgia under the care of his very strict grandmother. He often described his early life as isolated, as his grandmother limited his friendships and activities. This sense of alienation continued throughout his life, and mirrored the discrimination he felt as a Black man in mainstream white society. Although a sense of melancholy invades this painting, the sunlight reflecting on the red streamers and white clouds suggests not only the end of the festival, but the beginning of a new chapter.