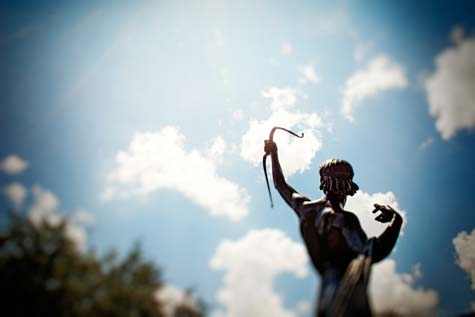 Diana of the Hunt

Given to the Cummer Museum in celebration of its opening in 1961, Diana of the Hunt has come to be an important element of the Museum’s historic Gardens. Artist Anna Hyatt Huntington, who gifted the sculpture to the Museum, was highly regarded for her skill in depicting human and animal anatomy. Diana of the Hunt combines these two strengths. Perched atop a globe, Diana, Roman goddess of women and patroness of the hunt, shoots an arrow towards the moon as her hunting dog jumps in excitement.

Support for the restoration of this sculpture has been provided by the Henry Luce Foundation, FOCUS Cummer, Mrs. Barbara H. Arnold, Mrs. Walter A. McRae, Jr., and Mr. and Mrs. Robert T. Shircliff.