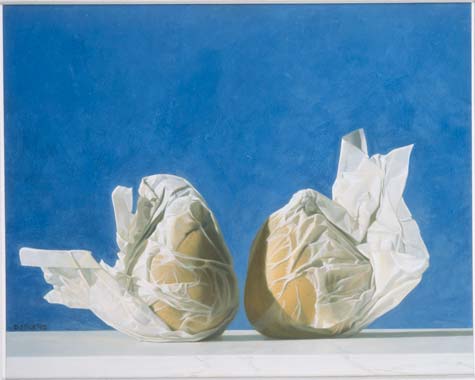 Jerry Dodge’s inspiration was borrowed pears ordered from the Harry and David catalogues that arrive in many American homes with great regularity during the holidays. The artist had refrigerated several of these and when he removed them, the condensation made the paper cling to the fruit. He was struck immediately by the very real artistic and expressive possibilities he saw, much as he had been when he recognized potential subjects in torn packaging and odd-shaped bread from Bologna.

The subtitle of Fandango refers to a lively Spanish dance. The paired canvases were among his most popular in the last exhibitions and Dodge himself admitted that he found them to be among his most successful late works.