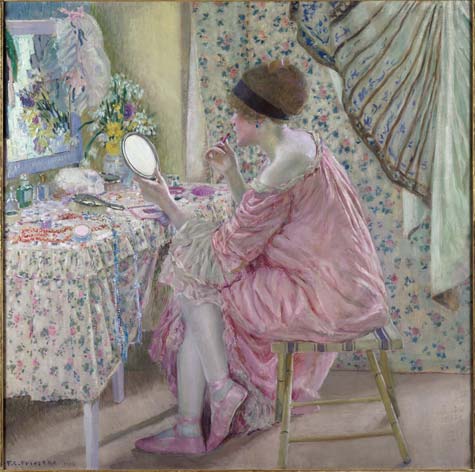 Applying the last bit of ardent rouge to her lips before going on stage, a dancer sits on a stool in her dressing room, looking at herself in the mirror. This intimate scene was captured by the American Impressionist artist Frederick Carl Frieseke with a very tender, almost monochromatic palette of pink, pale blue, marble white, and an occasional patch of yellow.

Born in Ossowo, Michigan of German ancestry, Frieseke studied painting in Chicago and Paris. He spent most of his adult life in Europe and explained, "I stay on here, because I am more free and there are not the Puritanical restrictions which prevail in America … I can paint a nude in my garden or down by the fish pond and not be run out of town."

This painting was created while Frieseke spent the winter of 1912 on Corsica, an island off the Italian coast. He rented a house and garden there, and sent for his favorite model Marcelle, who posed as the dancer in this painting. He wrote to an art dealer that he had nothing prepared for the upcoming Paris Salon exhibition. Nevertheless, Frieseke was able to complete six canvases that winter for inclusion in the Salon that spring. Before Her Appearance was among them, and was very well received. It was bought by Mrs. Gertrude Whitney Vanderbilt for her private collection.