The Sculpture of Chaim Gross 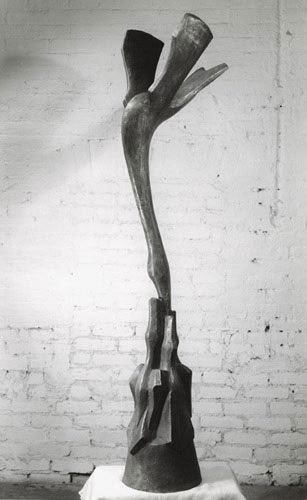 American sculptor Chaim Gross (1904-91) is renowned for his figurative direct carvings in wood from the first half of the 20th century. In the mid-1950s, however, he began to make large-scale bronzes, which enabled him to shift from the solid massing of his carvings to a more open, linear style. From 1957 through the 1980s, Gross created more than 300 bronze works that range in scale from miniatures to life-size portraits to large-scale public works. Today, approximately 100 of these bronzes are in public collections. Around a dozen are on permanent view at American universities, and particularly in Gross' native New York, including Yeshiva University, Fordham University, Pace University, and City College. This installation features eight of Gross's large-scale works in bronze from the collection of the Renee & Chaim Gross Foundation that are among his most eloquent and powerful sculptures in the medium. They feature the family groupings, acrobats, and circus performers for which Gross is best known, while others reveal a more abstract approach to form. The interdependence and connectedness of the forms and figures within each work reveals a generosity of spirit that continues to reverberate today.

This exhibition was organized by the Renee and Chaim Gross Foundation.